It has been six years since the fire in Odesa, Ukraine, on May 2nd. On this day in 2014, I was working on what would become Two Big Differences. When I talked to Ukrainians I knew about what happened, I heard conflicting narratives. My late mother-in-law blamed the pro-Ukrainians. My sister-in-law blamed the pro-Russians. I found videos of girls making Molotov cocktails with a smile. I heard a pro-Russian Ukrainian who was inside the building tell about how he was saved by somebody whom he never met but who said, “A person who supports Ukraine saved you.” I don’t think the pro-Russian remained pro-Russian that much longer.

I don’t think there are many who remain pro-Russian at this point. People who lived in Ukraine died in Ukraine that day. Odesa is Ukraine.

Here’s the beginning of Chapter Twenty of Two Big Differences:

“The Second of May, 2014, it was a little cloudy in Odessa. Zina always loved clouds, how their light made visible the ongoing tremble of the world. After she left her papa, Zina wanted only to move. There had always been a need within her to leave the place where she was and return to hear it for the first time.

She boarded one of Odessa’s many microbus routes. She didn’t know which one. She picked randomly and found herself on a marshrutka that took her away from the city center, away from American tourists, further, even from other post-Soviet people touring Odessa, further, into parts of the city where haggling is demanded by people’s budgets. She picked her nose, discreetly. Hope had crested, spritzed her face. Immediately, she knew it was the kind of hope that is a rabid lie, feverish, evaporating along with sweat. All the same, it healed her somewhat, touched her forehead, her chin, lifted it like the fingers of a mother. All the same motherless, maybe she could still love him. Even though she was sitting, she felt as light as the butterfly, throwing herself — since butterflies are feminine in her language — against the window. She flew out of the open sunroof, opened her wings and was free above Odessa. The smell of cotton candy rose from Park Shevchenko. There, not far below her, was that turning devil’s wheel. There was the Opera Theater. The Black Sea was as flat as a pane laid on the floor. For a moment, this butterfly forgot she wasn’t a bird. She kept going, her torso as black as that vastness, which did not swallow her, only lightly kissed her with puckered waves before she herself plunged in.”

Rockets have even hit Tairovsky Cemetery in the Odesa Oblast, the third largest cemetery in Ukraine, where my grandmother-in-law is buried and the mother of my friend. He has been looking after the flowers at their graves. I have been there twice in my life, and I wrote about it in my novel, never thinking that Russians or anybody would have any reason to attack a place where the dead rest.

From Chapter 12 of Two Big Differences :

“Here is some penny tray advice. Get it? Take or leave?” Valinka had no Odessan response. She continued, “Take what you get in life. Everybody gets scammed. They rip off each in their own way.”

As she led Valinka further into the cemetery, the women who had ripped him off began singing in high, nasal voices, more like keens than entertaining song. The singing voices carried the repetition of a melody. The women chanted, cut themselves off, began again. This wail demanded only silence. It was the same way the trees, branches, and leaves demanded silence. It was the same way the stone did. These natural objects, these women, they demanded very little from people. Silence was the least one could do.

The late morning sunlight ushered Zina and Valinka further. The grass and weeds growing out of her dead ancestors — and Valinka’s, as far as he knew — appeared to shrink from the brightness. The air hummed, fated with rain. They moved on foot over the dusty crush toward the sea of graves. The ground sounded
wrong to her. The keening of the women sounded as if it were becoming louder, coming closer. Valinka could not see her face as she plunged forward, sweat pouring down her cheeks. Her sobs could be written off as panting. They passed a grave with a metal picnic table. Valinka stepped over to it and flattened his body across the metal, which clanged underneath him. On his belly, he put his arms out as if he were a parachutist. He must have been trying to impress her, show that he could be as wild and irreverent as she. 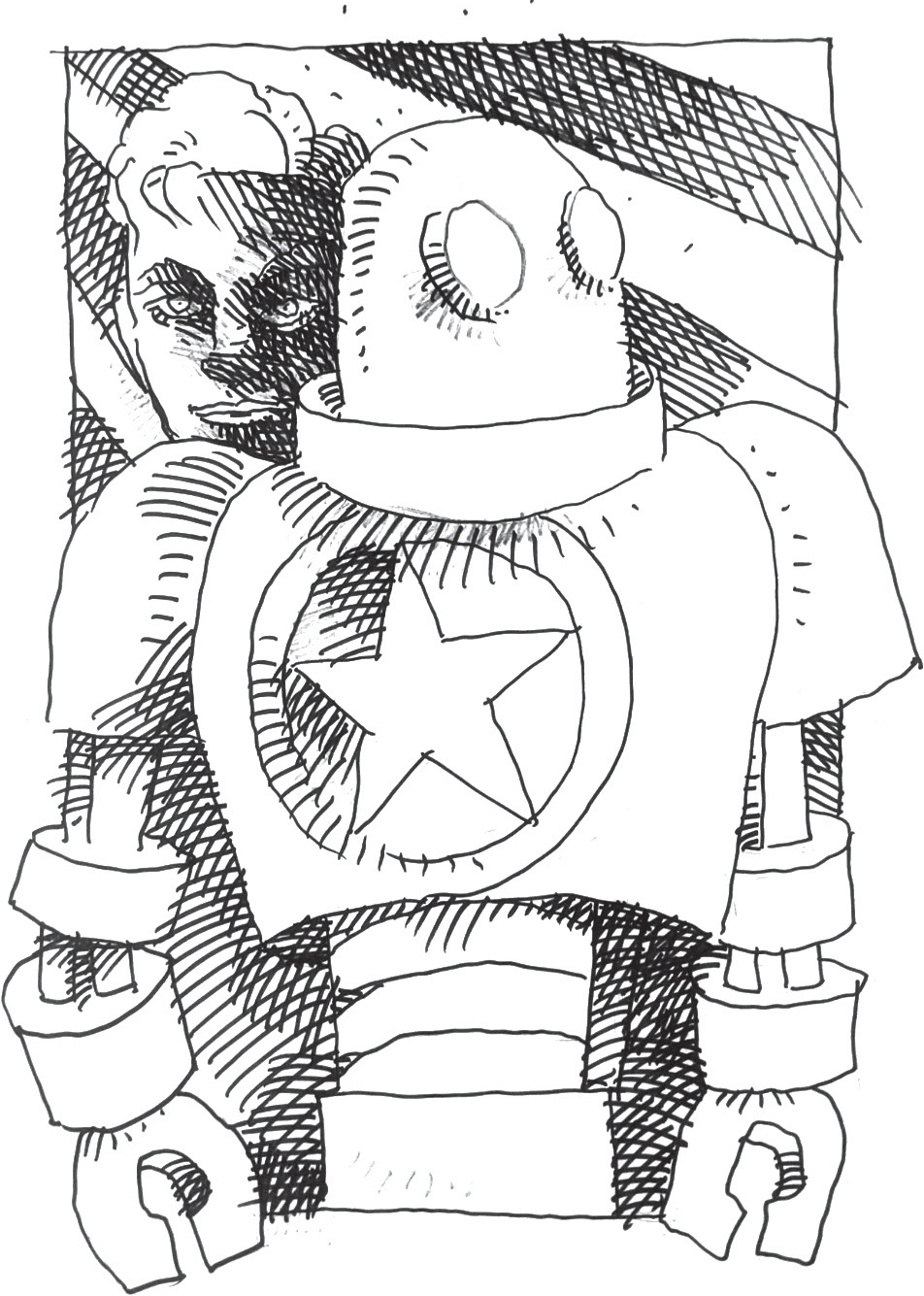 Another bad day was when I needed a toothbrush. I had seen kiosks that had shaving cream, kiosks that had bird seed. I thought a kiosk attended by an attractive young woman must have had a toothbrush. I approached unprepared. When I came to her and she brightened up at my approach, I said Do you have… I had forgotten the word for brush. Teeth? I put an imaginary toothbrush in my mouth and used my tongue to push my cheek out sideways. She gasped at me, horrified, and shook her head. “No!” she said and slammed the shutter of the kiosk in closing it. Once I understood, shame sucked me to the ground. A crow there cawed and hopped around the corner as if on her way to tell other crows about my ridiculous mistake. If you still don’t understand, face a mirror, ask your reflection if they have teeth, put an imaginary toothbrush in your mouth, push your cheek out with the imaginary toothbrush, and watch.

I’m very honored for this very personal review by the writer Kim Liao in The Rumpus.

It was important to note that the invasion of Ukraine happening right now is very real and that people there should be at the center of our thoughts and prayers now. I thanked some people there at the end of Two Big Differences. I’m very concerned for their safety at this time and am trying to remain in contact.

Ukrainians have the right to *NOT* be invaded.

Ukraine is a unique, distinct culture, one not “created by the Soviets” as Putin says in his revisionist history.

Here are some ways of supporting Ukrainians during this time:

Razom (“together” in Ukrainian) coordinates delivery of medical supplies into Ukraine.

I’ll update this list as I find more resources. Please feel free to reach out if you have any ideas.

When I finished Torrey Peters Detransition, Baby, I read past the ending into Peters’ “Top 10” influences on her fantastic novel. Peters had released books before, but she had never experienced the mainstream success that Detransition, Baby has enjoyed. It was a good model, so I made my own list, except that, in true odd fashion, it’s 11 books (and I make no claim whatsoever as to it being complete).

You can see it here on the website 2bigdifferences.page.

It’s a deep honor to read this review of Two Big Differences, which the reviewer calls, “an urgent, heartfelt meditation on how a common language can be used to divide just as easily as unite.”

A voice boomed in the first room of the office. A chair rolled and slammed to the floor. The boom said, We wouldn’t want this very important work to fall into the wrong hands, like those of the fascists in Kiev. So, we’ll take some of these materials under our own protection.

This voice caused her to fall back on her upbringing. Zina fell back into the hustle and drive, which an Odessitka inherits. Her arms, hands, and fingers began moving in concert to gather as much of the real archive, the paper and ink diaries themselves, as they could and place these items into her large bag. These items she treated like passports. She knew immediately with an unconscious genetic memory that she would need them to cross a border, or some other surface like that of the place where water meets air. On the other side, she was unsure whether she could breathe without these documents.

Zina entered the room where Nastya and Dasha were trying to confront the men. It’s a matter of respect for the privacy of the witnesses and their families, Dasha said. As another man started carrying
a box out, she said, Many of these are the only versions of such documents.

Who are you? Under which authority do you act? Zina asked.

He turned his head to her and chuckled. He said, We’re Russians. We’re Soviet, imperial patriots.

Of what? Odessa? Is that a joke? God, she wished it was.

“Even though the novel is mostly presented in English, I kept returning to the question: what’s the linguistic background of this book? I’m thinking of your original question here—if this book is a translation, what would the original language of this book have been?” –an interview in Fiction Writers Review

I’m very pleased to have my book on shelves in an IRL, in-person bookstore! Thank you to BookMark Shoppe of Bay Ridge, Brooklyn!